Outside it’s raining…. Inside it’s MINIMAL! 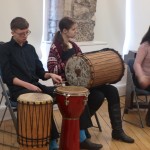 The summer of 2012 was spent delving around in the world of Minimalism, playing and listening to late 1950’s – 70’s pieces by La Monte Young, Terry Riley, Steve Reich and Philip Glass.  Jumping forward in time to consider ‘Different Trains’ and then back to ‘Einstein on the Beach’  provided us with inspiration to tackle our first group composition ‘The Sea is Tranquil’.

Not strictly minimal, but with strong influences, the piece was written by the group to play at Glasgow Royal Concert Hall’s Family day ‘The Underwater party’.  It was very well received by our audience, who ranged in age from around 2 to 82!

After playing, Sonic Bothy members led a short workshop, with Adam, Ellen and Joseph working with some very young musicians, accompanied by Matthew and Andrew on synth and piano.   Some smooth warm up moves were followed by some playing along to ‘The Sea is Tranquil’ by our young musicians, lending it another layer of sonic delight.

As a group we’ve discussed the opportunity many times since, how much we enjoyed it, and now consider the possibilities of working with children and music….we’re all for more inclusive workshop-leading teams here at Sonic Bothy!  The more the merrier we say!

Thanks to our partners Glasgow UNESCO City of Music & Glasgow Life for inviting us along to the party and supporting our involvement.